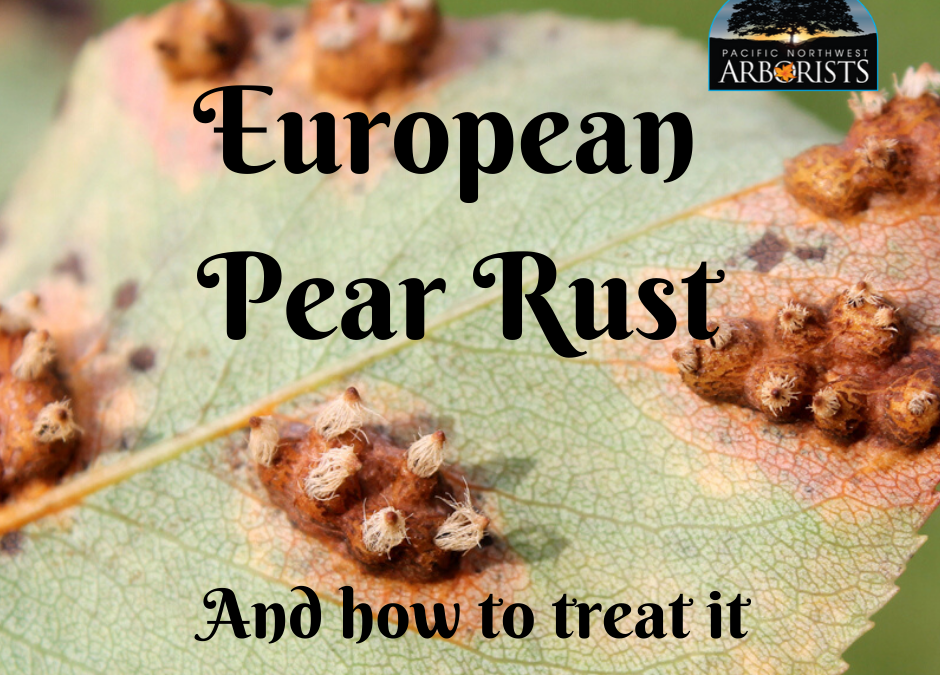 WHAT IT IS: Juniper Tree Fungus

European Pear Rust is a disease caused by a rust fungus (Gymnosporangium sabinae). This fungus attacks both pear trees and juniper trees.

FACT: the rust fungus needs both the pear and juniper tree to complete its life cycle. Pear rust is even a regulated disease in some countries.

Gymnosporangium sabinae, AKA Gymnosporangium fuscum, pear rust, European pear rust, or pear trellis rust. Rust Fungus is a fungal pathogen that preys on Juniper trees and shrubs (Juniperus) as the primary host. The only known secondary host is the pear trees (Pyrus).

Similar to other common rust diseases, Pear Rust requires two different hosts to complete their life cycle from year to year. Juniper, being the winter host, and Pear being the summer host. Spores (aeciospores) are produced from the fungal growths that extend from the blisters on the underside of the pear leaf. These then become wildly airborne, and infect the Juniper tree.

Once the infection reaches the Juniper tree, the fungus grows in swellings on the susceptible twigs and branches. Then, in the Spring, after continuous rain or heavy dew, swellings, or galls, on the Juniper tree produce tiny dark horn-like growths. These growths become covered with an orange-brown gelatinous mass called Telia.

The corresponding stage on the Pear trees is known as aecia. The telia and aecia release wind borne resting or hibernating spores, called teliospores and aeciospores. These spores are capable of infecting susceptible pear leaves and juniper respectively. Spores produced from the fungus-induced swellings on Juniper stems can be infectious up to almost four miles.

Next, the fungus is not capable of surviving on dead plant material, so its only option is the living. Pear rust feeds on the living cells of host plants, or alternates with a different host, Lastly, the fungus produces resting spores to pass during the dormant season.

On Pears: In the Spring, usually in July, the disease causes a yellow-orange spot that turns bright red on the upper leaf surface of pear leaves. Signs of the infection becomes even more active during the Summer and early Autumn. In August and September, with brown, gall-like outgrowths that develop on the corresponding lower leaf surface.

Fruit may be affected, but this is much less common. In mainland Europe, the fungus can also cause perianal lesions, or cankers on the branches, which can be damaging to young trees in particular.

On Junipers: Recurring cankers on stems and branches that produce orange, horn-like outgrowths in spring. This is more prominent following periods of high humidity. 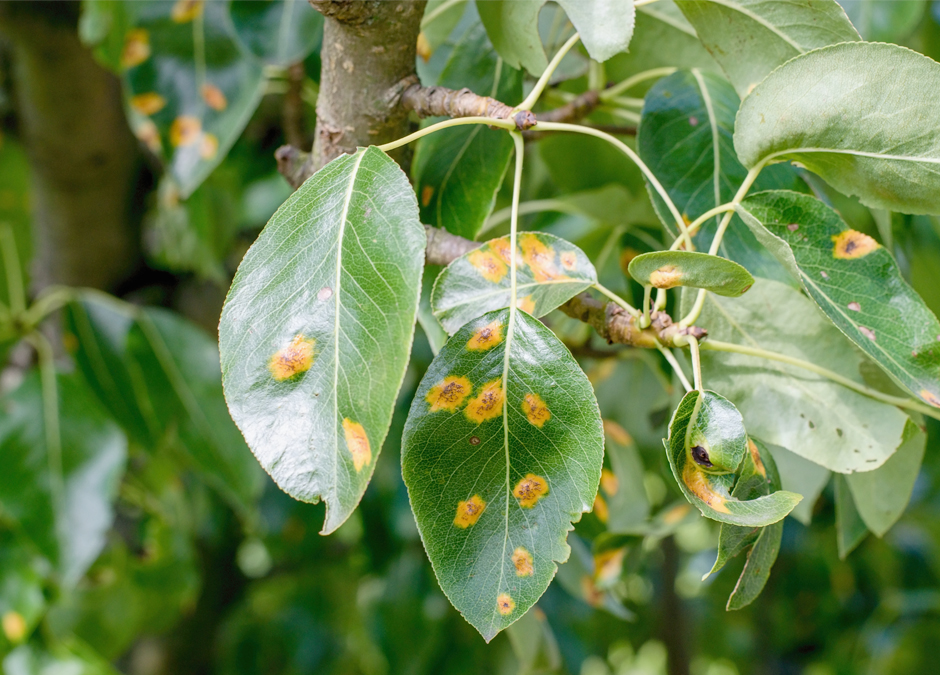 This disease can be especially damaging on Pear trees, resulting in complete defoliation and crop loss if not treated. If you have Pear trees, or a small orchard in your yard, treatment is important so it doesn’t spread and ruin your entire crop.

The only proven treatment of Pear Rust is luckily the natural route! Pruning is always a great place to start when treating a plant disease. By carefully pruning Junipers to remove rust infections from the stems, you can reduce the risk of worsening the infection.

Keep in mind that you’ll want to prune the infected branches with cankers, and not just the leaves on the trees.

Also, simply removing whole plants from the vicinity of pear trees will reduce the likelihood of infection. Please note that the spores are airborne over quite long distances.

There currently aren’t any fungicides being produced that are safe for trees from which the fruit will be consumed. Common fungicides that are approved for the control of rust diseases on ornamental plants like tebuconazole, tebuconazole with trifloxystrobin, and triticonazole, found in store brands like: Bayer Garden Concentrated Fungus Fighter, Toprose Fungus Control & Protect, and Scotts Fungus Clear Ultra. These products could also be used on ornamental pear species from which any fruit will not be consumed.

If  you aren’t sure if your trees have a disease, make sure to contact a professional arborist who can correctly diagnose your trees. You’ll protect your investment and prevent further deterioration of your landscape.