How to Identify Tree Diseases 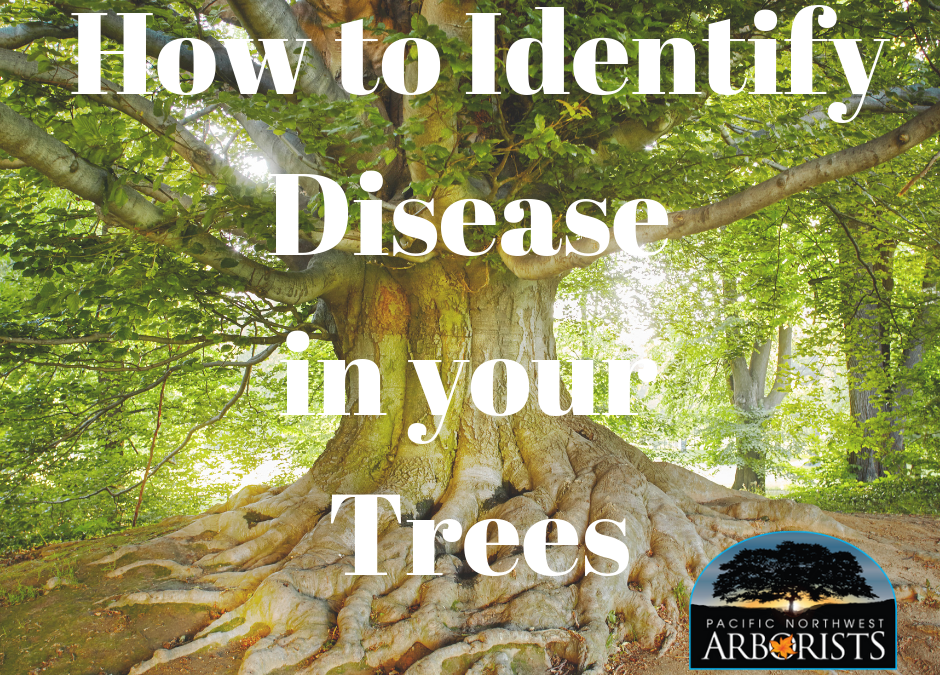 Oftentimes, homeowners focus on the aesthetic of their lawn when caring for it; however, they might overlook the overall health of their trees and shrubs. Tree disease often goes unchecked and eventually becomes a major problem and cost. Trees not only provide shade for a lawn, but also beauty and help sustain the ecosystem for local wildlife.

When a diseased tree goes untreated, it could fall on a car, fence, house, or even a person. As a homeowner, it’s best to get educated on spotting the signs of disease to prevent any costly damages.

How to Spot Tree Disease

Yellow or brown leaves coupled with slowed tree growth are often signs of armillaria root rot. You may also notice major branches dying and excessive wilting in trees that have this disease. Fungus in the soil rots and attacks the roots of trees and plants, causing the disease.
Trees with armillaria root rot often take a few seasons to die. However, this process can accelerate if the tree doesn’t receive enough nutrients or has attracted excessive amounts of insects.

Fomes fomentarius is a fungus that often damages trees like Hickory, Cherry, Maple, and Birch. This fungus appears as a hard, hoof-shaped structure that is a gray color. On the bottom side of the structure, the fungus has millions of white, tiny pores. Once fomes fomentarius attaches to a tree, it will continue to grow until removed.

Another sign that your tree has a disease is peeling bark. The bark on your tree is important, as it protects the inner core of the trunk and keeps the tree healthy. If the bark on your trees starts to peel, the trees may not maintain necessary nutrients and could die.
Keep in mind that many trees normally experience small amounts of peeling bark. However, if you notice that larger pieces of bark are falling from your tree, call a professional arborist for help to investigate.

Another common sign of disease is white, powdery mildew on the leaves of trees. This powdery mildew can develop later in the season when the weather has reached high humidity levels. Along with white mildew, you will likely see a distortion of leaves and stunted tree growth.
In the early stages, powdery mildew starts in small, white spots. These spots will expand and eventually cover the leaf’s surface

A common disease in more than 100 plants is fire blight. When a tree has fire blight, the shoots or flowers on the tree will turn black. Once the shoots and flowers are infected, they will eventually bend into the shape of a shepherd’s crook.
These symptoms typically appear a few weeks after a tree has been infected. Once the disease enters a tree, bacteria populations can double by the hour.

If you notice fluid coming from your tree, it may have alcoholic slime flux. In extreme cases, excess fluid that will pool around the base of the tree. This fluid often has a sour odor and leaves dark streaks down a tree’s bark. Most trees with alcoholic slime flux begin to produce fluid in spring and summer.

Light Brown Shelves near the Base of the Tree

Inonotus dryadeus is a fungus that can cause rotting diseases in trees like Oaks. The fungus stunts branch growth as it infects the tree. Eventually, the fungus reaches the base of the tree and forms large, light brown shelves near the soil. Over time, the light brown shelves harden and turn black.
Infected trees may fall soon after showing obvious symptoms, so you should have the tree removed if you see signs of this fungus.

Treating a diseased tree should be handled by a professional; the wrong treatment could result in accidentally killing the tree.